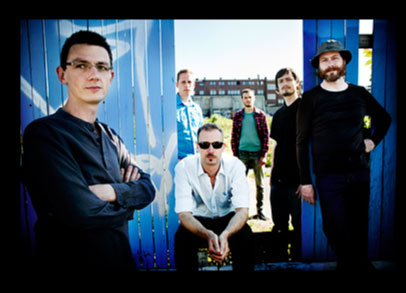 The Swedish group The Opposite was initiated by Loïc Dequidt and Peter Nilsson with a desire to investigate improvisation and interplay through a collective approach. Their music is based on rhythmic concepts, partly inspired by the musical traditions of India, Africa and Cuba. The group’s instrumentation and open approach creates a wide spectrum – sonically, dynamically and rhythmically.

Despite the complexity of the music, the members of the band find their freedom within the written material and are then able to focus even more on the collective sound of the group. The communication within the group has been likened to Miles Davis’ groups of the 70′s, Keith Jarrett’s American quartet, Weather Report and Sun Ra.

”This year’s winner is rewarded for how they, with a fearless and uncompromising attitude, manage to combine ethereal airiness and rhythmic complexity in their driving and searching take on jazz, as genuine and unpredictable in its collective base as in the individual, dazzling solos.”

“In Action”, released in 2012, was recorded live during a Swedish tour in late 2011 and illustrates how the group’s intricate music sounds and evolves face to face with an audience – spontaneity, power and groove all at once!

The Opposite was also featured in ‘Jazz på Nysvenska’, a TV program aired on SVT (Swedish National Television) in the fall of 2011.

The Opposite consists of: